You will find here more informations about Zynthian Hardware.

Actual kit version is v4.1, it can be purchased by visiting the Zynthian shop. You can also purchase some individual parts if you want to build a custom version that will better fit your needs.

As is, the kit consists in:

Building an official kit is quiet easy and procedure is fullly described here.

You will also need, and this is really important for having the best experience:

Official Raspberry Pi PSU is highly recommended (can deliver 5.1V 3A and is shiped with an excellent USB cable) and is also available in the shop.

The Zynthian web configuration tool has several options to adapt the system to different kind of hardware but be aware that only the kit parts are officialy supported, other have been reported to work at a given time but could not work anymore.

Below is the list of the hardware that can be configured with the Webconf tool and the kind of interface they use.

Note: most of the usb sound cards should work out of the box with the "Generic USB device" settings.

Other hardware: Parts sourced in some Chinese shop.

Before you go for it

Note: You are on your own when trying to make them work with Zynthian. Some can be well supported by Zynthian software as they are clones from some well knowns products, some will work with more or less hassels and some will just not work at all.

Advice: Be carefull when trying to use any kind of "installer script" as they can overide a Zynthian configuration file. It is always a good idea to test these kind of harware on a stock Raspberry Pi OS and to study what's already done by the installer script.

Many of them are waveshare clones, look at them carefully and especially to the GPIO pins they use and to the chips used to control the display ad the touch interface. Avoid displays that are using parallel, RGB or DPI interface.

Try to identify the DAC, ADC or CODEC chip

The following is based on the kit v4.1 schematics but keep in mind that most of it is optionnal ! One may choose to run an headless Zynthian, or with just a HDMI display and an USB and/or keyboard. Zynthian is modular enough to fits many needs a from pocket sized gear to a customized midi keyboard that will embed your build. All schematics below are from the V4.1 Kit Building Tutorial and can also be found on Github. 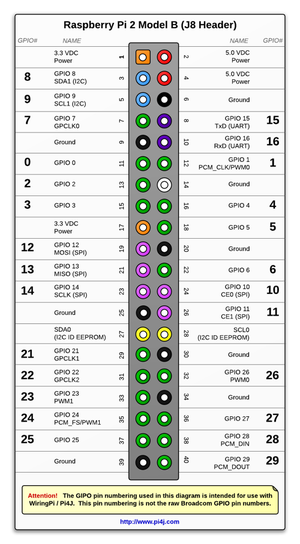 The Raspberry Pi is the heart of Zynthian, it runs the all the software and can be used "as is" in a headless setup. But it also communicates with all the hardware add ons that makes a Zynthian Box.

The V4.1 setup use the following pins of your Raspberry Pi:

Pin numbers given above are the Raspberry pins numbers and as noticed on picture and because Zynthian software makes the use of the WiringPi library, they have also a specific WiringPi number wich does not correspond to the Broadcom chip pin number. So one may find usefull to have this table:

Controls: Rotary encoders and the switches