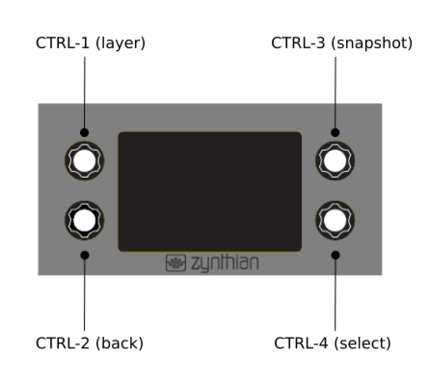 The Zynthian UI is displayed on a touch display and controlled by 4 knobs (rotary-encoders with push-switches). The knobs are used to navigate between the different screens/menus, select options and change the instrument parameters, acting as MIDI/OSC controllers. You can emulate the knob's behaviour using the touch-display, but it's sub-optimal and accessing some features could be tricky.

Almost every Zynthian UI screen is one of these 2 types, however, other screen-types do exist:

There are 3 types of clicks (push-switch actions) that can be performed, depending on how long you hold down the knob (or hold your finger on the touch-display):

Click actions for each knob are context dependent. Generally, the SELECT knob is used to navigate and a short click on it will select an item on a "Selector Screen". Inside a "Controller Screen", short clicks can be used to rotate between layers (LAYER knob) or between controller pages (SELECT knob). "Bold-clicks" are intended as shortcuts for jumping to some specific screens. Clicking the BACK knob generally jumps to the previous screen in the workflow sequence.

Most of the actions depend of context (current screen), but there are some actions that are global and will work from any screen: 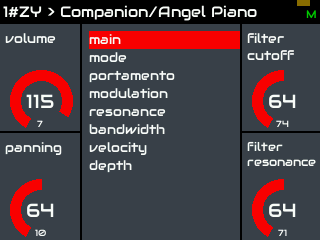 On the top-right corner there is a small area where some useful information is displayed in real time:

The CPU-load bar shows the CPU usage as calculated by the Jack Audio Server:

The green M flag is shown when MIDI messages pass thru the MIDI router. Not all messages are detected. Only CC, Program Change and Note On/Off.

The red X flag is shown when there are Xruns. You should hear clicks and pops too ;-)

When the red V or T flag is shown, your zynthian is working in a degraded state, with the CPU frequency capped to 600-800 MHz, trying to stabilize the system and avoid a system crash. You shouldn't see any of them and if you do so, you should consider looking for a better power source (under-voltage) or using a heat sink (over-temperature).

Finally, the red R and > flags show the status of audio capture: recording/playing

Layers are a key concept on Zynthian-UI: the first thing you do when you power-on your zynthian is create a layer ;-)

A layer is an Audio Processing Chain, normally assigned to a MIDI channel, that can be composed of one or several Audio Processing Units. This units are chained by default, although you can customize the audio routing. The first unit in a layer is the root and determines the layer's type:

The rest of units in a layer normally are FX units that process the audio coming-out from the first unit (root).

The following flowcharts show the different "screens" or "menus" and how to reach each one using the 4 switches. It would be a good idea to print these flowcharts and keep them near your Zynthian Box until you memorize the workflow and the spirit of the Zynthian UI gets inside you ;-)

If you want to contribute to improving these flowcharts, you can edit them using the Google Documents Tools: 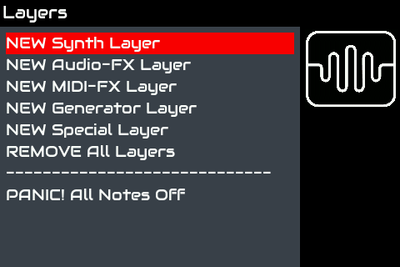 This is the first screen you should see when you power on your zynthian and no snapshots have been stored yet. Select New Synth Layer to get started.

There are several options on this screen:

The last option, All Notes/Sounds Off, can be triggered by bold clicking CTRL-1 (layer) from the layer screen (contextual action). You can trigger this actions from any point in the workflow by simply bold-clicking twice CTRL-1. Also, you can add a panic-button to your zynthian using the extra pins from the AllInOne circuit. Read this for a detailed explanation about how to add a panic button to your Zynthian. 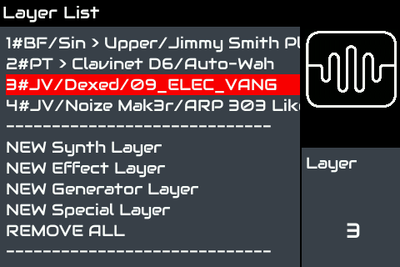 When you select NEW Synth/Effect/Generator Layer, you create a new root-layer (first of a chain), choosing a free MIDI channel for it. You can create up to 16 layers (as many as MIDI channels), each one having an independent effect-chain. 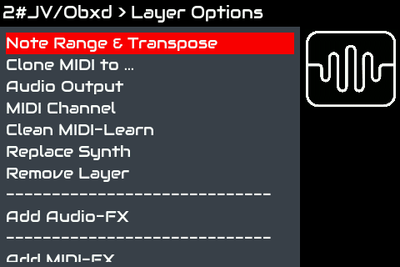 If you bold-click the select switch over a layer from the list, the "Layer Options" menu will be displayed for the selected layer. This menu allows you to: 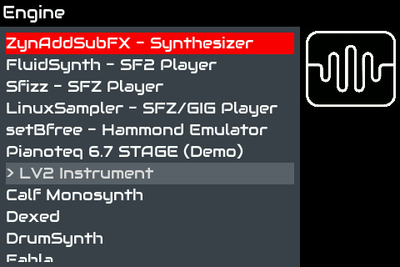 When you create a new layer, you are asked about which engine/plugin you want to use for it. A list of engines to choose from is displayed. They can be synthesizers, effects, generators or special engines, depending on the type of layer you are creating. When you click on the list, the zynthian logo on the top-right will be animated while the engine is being started.

Some engines have special behavior regarding layers and MIDI channels: 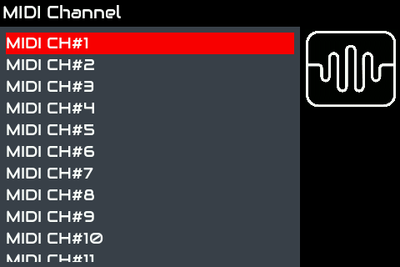 This screen is shown in various contexts: 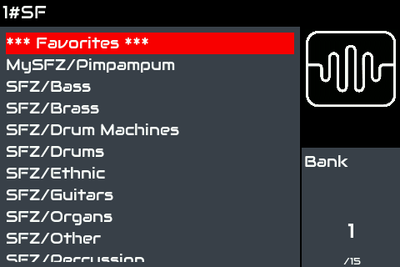 Presets (instruments, patches, or sound designs) for a synth engine are organized into banks. Choose a bank to see the list of presets you can pick from within that bank. 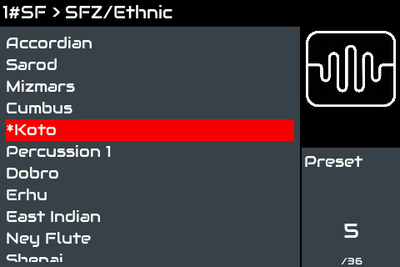 If the preload with note-on feature is enabled, you can preload the presets by playing notes. When you do so, the highlighted preset will be pre-loaded before clicking select.

You can return to the control screen directly, without selecting any preset, by clicking "bold-back". In such a case, the previously selected instrument will be loaded again in case you pre-loaded some preset.

This screen is shown after you have chosen a preset. Your instrument is now enabled and playable and you can modify the parameters.

Turning any of the 4 knobs changes the values of the synth parameters displayed in the squares at the sides of the screen adjacent to each knob. You also can use the touch interface to change the values. See below. 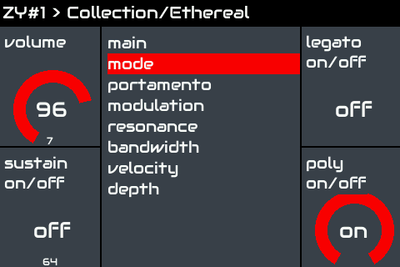 The central list shows the different pages of parameters that you may alter. You can navigate the page of parameters by clicking short-Select to step by one page. 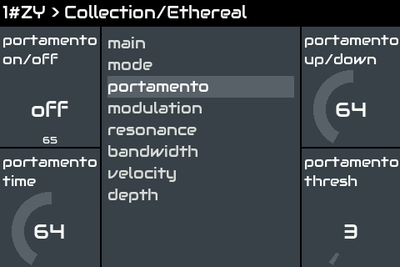 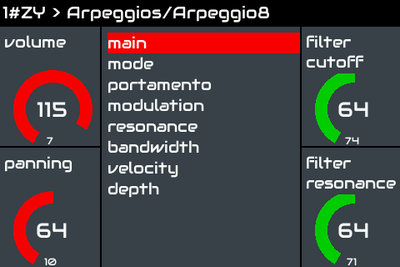 If you click 2 switches at once, you enter XY-control mode. The 2 controllers you clicked are green and you can choose the desired parameters to control by rotating the controller. Of course, you can navigate the controller pages by clicking select, etc. so you can select parameters from different pages. 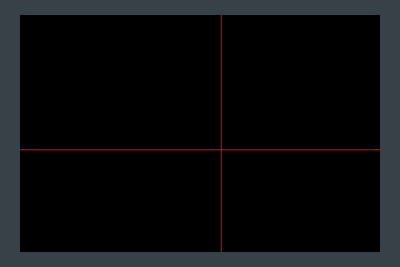 Once you have selected the right parameters, touch the screen for entering the XY-control-pad (using the touchscreen ala Kaoss Pad).

Press the Back switch to return to previous screen. If you press bold-Back, then you will go 2 screens backwards. 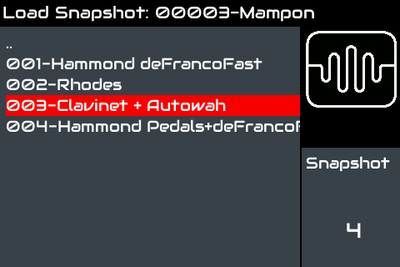 Snapshots are used for saving/restoring the status of Zynthian. A snapshot includes the full state, including layers, effects, parameter values, MIDI-learning, etc.

By default, snapshots are stored as a single list and bank-related stuff is not shown by Zynthian-UI. If you want to use banks for organizing your snapshots, you simply create a second bank using the webconf tool and the hidden bank functionality will be enabled.

When using snapshot banks, if you want to go up one level (from snapshot list to bank list), you must use the ".." entry. The back button will close the snapshot screen.

If "Restore last state on startup" option is enabled on webconf (and it's enabled by default!), then state will be saved when poweroff (using long-click select or from Admin Menu) and restored on next boot. This option has priority over the "Default Snapshot". 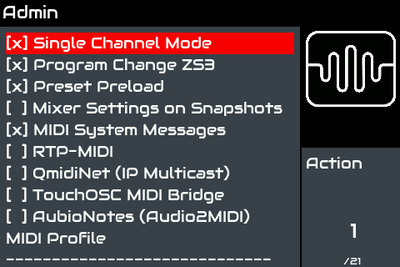 Pressing the Back knob, when you are in the Layer List screen, brings you to the Admin menu.

The last item is how you safely power off the Zynthian without corrupting data files. 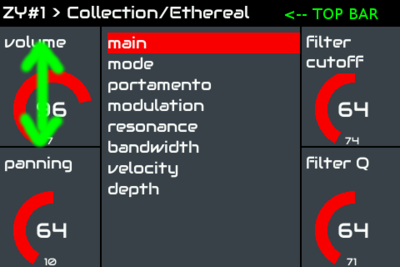 You can navigate and control the Zynthian UI without knobs/encoders/switches at all, using only the touchscreen.

You can "emulate" the switches by tapping the controller widgets (squares in the 4 corners of the screen). There are short, bold and long actions, same behaviour than rotary encoders work-flow. The only screen having the 4 controller widgets is the "Instrument Control" screen. Most of screens are selector ones, that only have 1 controller widget. On those screens you can click the zynthian logo (top-right) for emulating the "snapshot" switch, and you can go back by tapping the top-bar area.

MIDI-learning allows you to easily bind specific MIDI events with Zynthian-UI actions. There are 2 types of MIDI events you can learn: 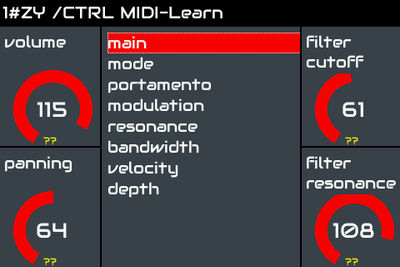 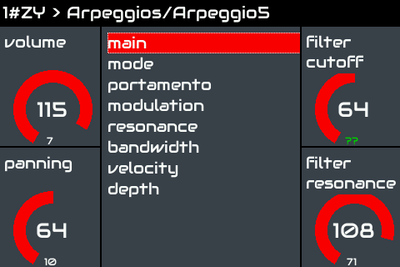 You can map any parameter in the Zynthian UI to a CC knob/slider on your external MIDI controller. I intend to extend this feature to other MIDI messages, but currently only CC messages are supported. Until then, MIDI-filter rules can be used instead.

Learning a MIDI-CC is quite easy:

1. From the control screen, you click the snapshot button. You will be in CC MIDI-learn screen. It’s identical to the Control screen except that all the controllers have a tiny yellow “???” in the bottom.

2. Move a zynthian controller. Its tiny “???” will change to green while the other 3 will go back to normal state.

3. Finally, move a knob/fader in your MIDI keyboard/controller and the binding is done. The new CC number should appear in the bottom of the learned controller, replacing the tiny "???".

Of course, MIDI-learning configuration, including CC mappings, is stored and restored with snapshots. 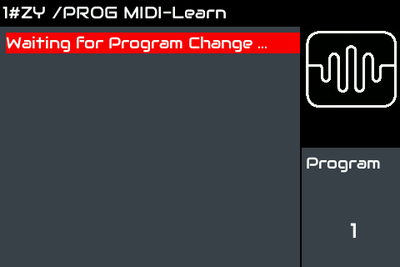 You can map "SubSnapshots" (ZS3) to MIDI programs. The idea behind this feature is to have a fast preset-change mechanism that can be used on stage. In combination with the “Single Layer” feature, it turns Zynthian in a “Stage-Beast”. You can prepare a snapshot for the full performance, and use ZS3 for fast changing from a song to another, or between parts inside the same song.

Learning a SubSnapShot is obscenely easy:

1. From the control screen, you click the snapshot button twice. You will see the current list of ZS3s and a message: “Waiting for Program Change…”

2. Simply push a “Program Change” button in your keyboard/controller and the ZS3 will be stored in memory, associated with the Program number you send.

After that, you can recall any stored ZS3 by simply pushing the same PC button again. Of course, the memory-stored zs3s will be saved with your snapshot and restored when loaded again.

As you can see, it has sense in a SnapShot context, where a set of layers are defined. Zs3 changing is very fast, as no engine must be started.

First, you need a working touch interface in your display. If you don't have a touchscreen, you could use a mouse ... 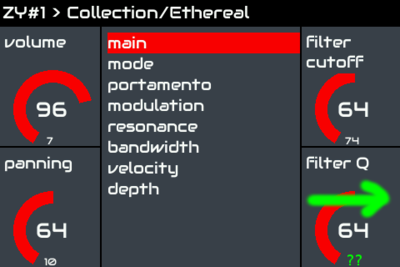 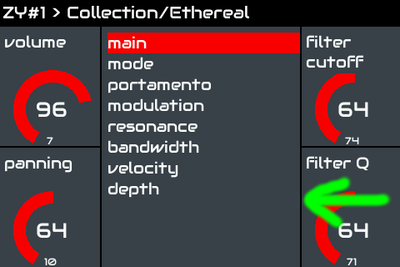