From ZynthianWiki
Jump to navigation Jump to search
The printable version is no longer supported and may have rendering errors. Please update your browser bookmarks and please use the default browser print function instead.

The Zynthian can be controlled remotely via 2 different MIDI network protocols: 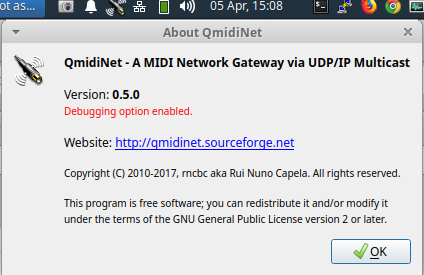 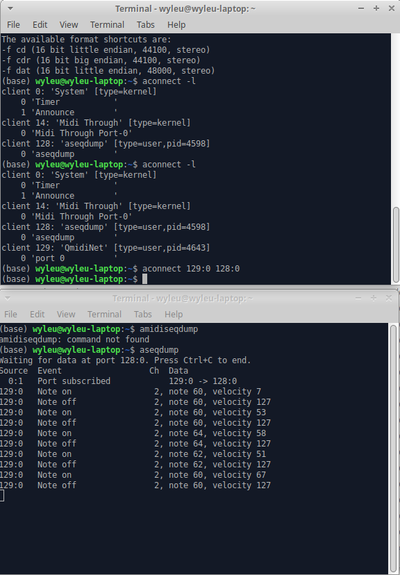 QmidiNet is a MIDI network gateway application that sends and receives MIDI data (ALSA Sequencer and/or JACK MIDI) over the network, using UDP/IP multicast. Inspired by multimidicast (https://llg.cubic.org/tools) and designed to be compatible with ipMIDI for Windows (https://nerds.de).

Once the network has been started on the zynthian, then you can communicate with it via tools like QMidiNet running in this case on a Linux desktop.

ANY MIDI event generated on ANY MIDI Channel that subscribes to the QmidiNet local network will be transferred to ALL other machines on that channel.

So in the above case the notes pressed on the remote zynthian machine ( connected by an ethernet cable to the laptop) appear as events on ALSA channel as displayed by an aseqdump terminal that has been connected to the QMIDINet instance running on the laptop, using aconnect to make the connection. This can all be examined using aconnect -l

This means that you have a high speed ( faster than original wired MIDI!) linking the two devices so you have no need of MIDI-USB or 5pin MIDI leads or any of that sort of physical stuff, all that is needed is an Ethernet connection between the devices. Maybe a little different but as soon as you get a few devices on the network then you really start getting dividends. Remember the Network Traffic cis visible in the MIDI status as a BLUe M and can be examined using the MIDI Network display in the MII Log webconf section . .

But it's actually much simpler than that . . .

You can simply plug two zynthians together with an Ethernet Cable ( Raspberry Pi's can do this without needing a router), select Qmidinet to on on both devices and both will be able to play each other, or one can simply act as the MIDI controller for the other. So you can have a MIDI KEyboard on stage plugged into a Zynthian and this can control a MIDI socket on another Zynthian up to a 100 Metres away . .

Why bring audio on to stage if you don't have too?

They can be enabled and disabled as shown below. 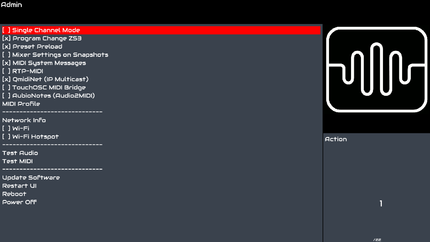 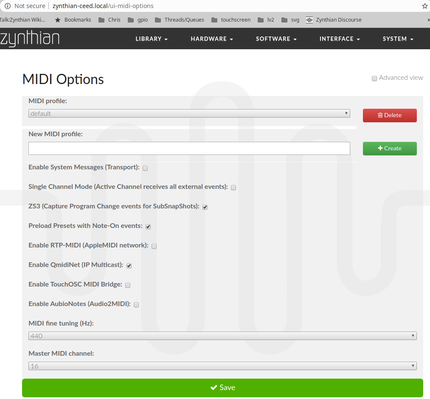 and the MIDI Data flowing into a Zynthian can be confirmed by a Blue M in the status area and examined using the Webconf MIDI-logger.